What to eat in Australia 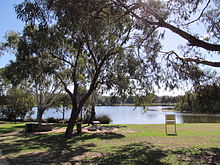 Outdoor barbecues at Jackadder Lake, Woodlands, Western Australia. Similar facilities can be found in many parks across Australia.

Centre Place in Melbourne's CBD is lined with cafes 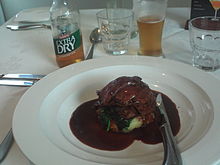 Kangaroo fillet at a restaurant in Sydney

A pavlova garnished with cream and raspberries

Vegemite, a salty yeast-based spread, best spread thinly on toast. If you aren't up for buying a jar, any coffee shop will serve vegemite on toast at breakfast time. It may not even be on the menu, but the vegemite will be out the back in the jar next to the marmalade. If you do buy a jar, the secret is it to spread it very thin, and don't forget the butter as well. It tastes similar to Marmite or Cenovis. Australians are quite used to the taste, and may spread the Vegemite very thick; but this is not recommended for first-timers.

The Tim-Tam is a chocolate fudge-filled sandwich of two chocolate biscuits, all dipped in chocolate. You can buy a packet (or two) from any supermarket or convenience store. Tim-Tams are required to perform the Tim-Tam Slam manoeuvre. This requires biting off both ends of the Tim-Tam, then using it as a straw to drink your favourite hot beverage, typically coffee. The hot drink melts the fudge centre and creates an experience hard to describe. Finesse is needed to suck the whole biscuit into your mouth in the microseconds between being fully saturated and dissolving. Tim-Tams are sold in packs of 11, so be sure to agree on the sharing arrangements before buying a packet with your travel partner, or onward travel arrangements may be disrupted. During summer, Tim-Tams are often stored in the freezer, and eaten ice cold.

The lamington is a cube of sponge cake covered in chocolate icing and dipped in desiccated coconut. It's named after Lord Lamington, who served as Governor of Queensland from 1896 to 1901. The home-baked form can be found at a local Saturday morning market, or you can buy one from a bakery if you are desperate. Avoid at all costs the plastic wrapped varieties sold in supermarkets.

The pavlova is a meringue cake with a cream topping usually decorated with fresh fruit. Served on special occasions, or after a lunchtime barbecue. Often the source of dispute with New Zealand over the original source of the recipe.

ANZAC biscuits are a mix of coconut, oats, flour, sugar and golden syrup. They were reputedly sent by wives and care organisations to world war I soldiers in care packages, but the story is likely apocryphal. They are available from bakeries, cafes and supermarkets, and are popular in the lead up to ANZAC day (25 April).

Damper is a traditional soda bread that was baked by drovers and stockmen. It has basic ingredients (flour, water and perhaps salt) and usually cooked in the embers of a fire. It is not routinely available in bakeries and only commonly served to tourists on organised tours. Best eaten with butter and jam or golden syrup as it is dry and bland.

A pie floater is a South Australian dish available around Adelaide. It is a pie inverted in a bowl of thick mushy pea soup. Similar pie variations are sometimes available in other regions.

A Chiko roll is a deep-fried snack inspired by the egg roll or the spring roll. Despite the name, it contains no chicken. Its filling is boned mutton, vegetables, rice, barley, and seasonings. Its shell is thicker than an egg roll, meant to survive handling at football matches. Available anywhere you can buy fish and chips.

The Australian Meat Pie is considered to be the national dish by many.

Cuisines widely available in Australia, often prepared by members of the relevant culture, include:

Eating vegetarian is quite common in Australia and many restaurants offer at least one or two vegetarian dishes. Some will have an entire vegetarian menu section. Vegans may have more difficulty but any restaurant with a large vegetarian menu should offer some flexibility. In large cities you will find a number of vegetarian and vegan restaurants, as well as in the coastal backpacker-friendly towns along the east coast. The market town of Kuranda or the seaside towns of Byron Bay are a vegetarian's paradise. In other regional areas vegetarians are often poorly catered for, but most towns will have a Chinese restaurant that will provide steamed rice and vegetables. Sydney and Melbourne in particular cater well for vegans and vegetarians with a large number of purely vegetarian restaurants, vegan clothing stores and vegan supermarkets.

People observing kosher or halal will easily be able to find specialist butchers in the capital cities, and will also find a number of restaurants with appropriate menus and cooking styles. Outside the capital cities, it will be much more difficult to find food prepared in a strict religious manner.

All of the capital cities and many regional towns in Australia host a "farmer's market", which is generally held each week in a designated area on a Saturday or Sunday. These markets mostly sell fresh fruits and vegetables, as hygiene standards in Australia forbid the selling of meat directly from market stalls. Butchers who set up shop at a farmer's market would usually trade their wares from a display cabinet within their boot (trunk). The attraction of markets is the lower prices and freshness of the produce. The attraction for the traveller will be the cheap and excellent fruits on offer - depending on the region and season. In regional areas the market is usually held outside the town itself in an empty paddock or sports field, markets in capital cities are easier to reach but the prices are typically more in line with those you would find in supermarkets. See the destination guides for details.