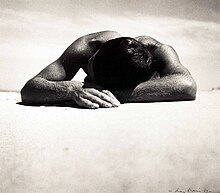 "Sunbaker" from 1937 is possibly the most widely recognised of all Australian photographs.

Exposure to the sun at Australian latitudes frequently results in sunburn. Getting sunburnt can make you feel feverish and unwell and may take a few days or weeks to heal depending on the severity. It means you can't go back out into the sun until the sunburn fades, so getting sunburnt on the first day of your beach holiday can seriously reduce the fun of your trip. It can take as little as 15 minutes to burn in Australia on a fine summer's day, even in shaded outdoor areas. You should wear sunscreen (SPF 30+), clothing, and a hat to shade the sun.

Re-apply sunscreen every 2–3 hours throughout the day as it wears off quickly if you are sweating or swimming. Make sure to cover all parts of your body. UV radiation in the middle of the day can be double what it is in the early morning or later afternoon, so if possible avoid the sun during the hottest part of the day. Daily UV forecasts are issued by the Bureau of Meteorology online.

If you are heading to the beach, consider buying a sun-tent (less than $20 from discount and hardware stores). You can't hire beach umbrellas at Australian beaches, and they are very exposed.

The tap water in urban Australia is almost always safe to drink, and it will be marked on the tap if this is not the case. The taste and hardness of the tap water will vary considerably across the country. Bottled water is also widely available. Carrying water on hot days is a good idea in urban areas, and it is a necessity if hiking or driving out of town. At sites where tap water is untreated, water sterilization tablets may be used as an alternative to boiling. If driving long distances on infrequently trafficked roads it is essential to carry drinking water. This is absolutely necessary in hotter areas and on dirt roads or tracks. It is rare that someone does not die of thirst in outback Australia in any year. It is recommended that in event of a breakdown you stay with the car for shade and to increase your chances of being found. Before long distance touring seek specific advice on calculating how much water to carry for the proposed journey and allowing for breakdowns.

Australia does not have endemic communicable diseases that will require non-standard vaccinations. Like many other countries, it will require evidence of yellow fever vaccinations on entry if you will have been in a country with a risk of infection within 6 days before your arrival in Australia.

Mosquitoes are present all year round in the tropics, and during the summer in southern areas. Screens on windows and doors are common, and repellent is readily available. Ross River Virus is spread by mosquitoes in the tropics, and can make you sick for a few weeks. There have been cases of dengue fever. Malaria is not present in Australia.

Australia has first world medical standards. In particular, it is safe to receive blood transfusions in Australia, as donors are screened for HIV, hepatitis and many other blood borne illnesses.

However, since Australia's population density is low, parts of Australia are a long way from medical facilities of any kind. Many of these areas are served by the Royal Flying Doctor Service. Towns with populations of 5,000 or more will have a small hospital capable of giving emergency treatment in serious emergencies, and larger towns will have a base hospital capable of routine and some kinds of emergency surgery. In severe cases, particularly any kind of injury requiring microsurgery, you will need to be evacuated to one of the capital cities for treatment. Evacuation procedures are well established and normally involve being evacuated by plane or helicopter. For this reason travel insurance or ambulance membership is highly recommended for those travelling to remote areas as helicopter evacuation could cost thousands of dollars.

Capital cities will have medical centres where you can drop in, often open on weekends or until late. In country towns you may have to make an appointment, and may have no alternative other than the closest hospital after hours and weekends. You can also expect to wait a few hours if your condition isn't urgent.

Australian citizens and permanent residents who live in Australia can receive health care through the taxpayer funded Medicare. Foreigners working or studying in Australia and without a reciprocal agreement are generally required to take up private health insurance as part of their visa conditions. Foreigners on a short visit will want to make sure their travel insurance is in order, as medical costs can be expensive for those not entitled to Medicare benefits. Even Medicare cover does not include ambulance costs (at least several hundred dollars) in the event of an emergency; only private insurance with ambulance cover will pay for this.

Travellers from Belgium, Finland, Ireland, Italy, Malta, the Netherlands, New Zealand, Norway, Slovenia, Sweden and the United Kingdom are entitled to free reciprocal Medicare treatment for medical problems that occur during their visit. It is advisable to familiarise yourself with the conditions of the reciprocal arrangement with your country. For example Irish people and New Zealanders are only entitled to free treatment at a hospital, whereas the other reciprocal nationalities are entitled to subsidised treatment at general practitioners as well. No reciprocal programmes cover private hospitals, and the full cost will have to be met by yourself or with travel insurance.

If you are not a citizen or permanent resident of a reciprocal agreement country then you can expect to pay around $60 to see a general practitioner, plus any additional costs for any pathology or radiology required. The charge to pay to visit a local hospital can be much more expensive, private hospitals even more so, up to $500 even if you are not admitted, and thousands if you are.